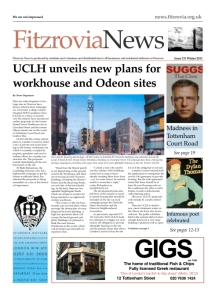 Plans for redevelopment of two large sites in Fitzrovia have drawn criticism from campaigners.

University College London Hospital NHS Foundation Trust (UCLH) in a flurry of activity over the autumn have announced outline proposals for the former Strand Union Workhouse site in Cleveland Street and the former Odeon cinema site on the corner of Tottenham Court Road and Grafton Way.

UCLH will this winter submit plans to Camden Council to build a mix of private and social housing on the former workhouse site which is currently occupied by property guardians and used as welfare offices for a nearby construction site. The proposals include demolishing all the non-listed parts of the site.

Neighbourhood news, features and comment.
View all posts by Editors →
This entry was posted in Fitzrovia News and tagged Fitzrovia, hyperlocal, journalism, London. Bookmark the permalink.

This site uses Akismet to reduce spam. Learn how your comment data is processed.